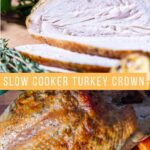 If you want a low maintenance way of cooking your turkey for Thanksgiving or Christmas, this is it. Slow Cooker Turkey Crown is the perfect recipe for flavourful, juicy and succulent meat without the need for basting. Oh, and you also get the best stock for gravy!

Turkey crowns are a popular choice for Christmas day as pre-prepared alternative to dealing with a whole turkey, giblets and all. A perfectly cooked turkey crown (hint: buy a meat thermometer!) will leave you with beautifully flavourful and carveable turkey breasts.

The crown is a whole with the bone left in, but the legs and wings removed. Still a beautiful and tasty Christmas dinner centrepiece, but with less waste. What’s more, because meat is left on the bone juices are released during cooking which are perfect for amazing homemade turkey gravy.

Turkey crowns cook fantastically well in the slow cooker, just season them as you would for the oven and leave them to cook.

Why cook turkey in the slow cooker?

Cooking a turkey crown in the slow cooker is a no-brainer. Here are some reasons why:

A slow cooker is a great way to cook your Christmas or Thanksgiving turkey!

The key to a great recipe for an occasion is achieving the balance between ease of preparation and of course, the taste. That’s the beauty of this recipe; the ingredients to season the turkey are few, and are all store cupboard staples.

Turkey crown. This recipe will cover any size from a 1.5 to 3kg turkey crown. Just be aware that you need to adjust cooking times according to size, so check the recipe notes.

Garlic. Garlic provides a savoury undertone for almost any dish.

Butter. A little butter mixed with herbs and seasoning stuffed under the skin keep the turkey succulent and flavourful.

Sage. Sage is fantastic in poultry roasts as it has a subtle earthy tone which compliments the delicate flavour of the meat. This recipe uses dried sage but you can use fresh (although use slightly less as it has a stronger flavour).

Other herbs can also be added but be careful with quantity. Thyme and rosemary for example are strong and fragrant, so use in small amounts to avoid overpowering other flavours.

Stock cube. A chicken stock cube crumbled and mixed in with the butter to add flavour.

Salt and Pepper. To season the outside of the turkey.

How to make it

Here’s how to cook a turkey crown in your slow cooker.

How long does it take to cook a turkey crown in the slow cooker?

The cooking time for a turkey crown depends on both the size of the turkey and the size and type of the slow cooker – timings given are given as a guidance only.

The best method for checking whether a turkey is cooked is a meat thermometer.

According to the FoodSafety.gov in the US and the Food Standards Agency in the UK, the safe internal cooked temperature of turkey is 75°C/165° F. The meat should be hot throughout with clear juices.

Here are some ideas of what to serve with your turkey crown.

And of course, don’t forget the cranberry sauce!

What can I do with leftover turkey?

Any leftovers must be cooled within 90 minutes and then wrapped in an airtight container. They will keep for up to 3 days in the fridge or 3 months in the freezer.

If you have a good amount leftover you may wish to create another dish from them, some popular choices are:

If leftovers are reheated, then make sure that they are piping hot throughout before serving.

What size turkey crown will fit into my slow cooker?

Due to the shape of the turkey oval slow cookers are best. A 5L slow cooker may accommodate a smaller bird of around 1.5kg whilst a 6.5L will be able to fit up to a 3kg turkey.

What size turkey crown do I need to buy?

Can I cook a frozen turkey in a slow cooker?

The turkey must be fully defrosted before it’s cooked. This is for both food safety and the tastiest result! Meat must be an even temperature throughout before cooking to accurately gauge cooking times.

Can I add bacon to the top of the turkey in the slow cooker?

When roasting a turkey in the oven bacon is added for flavour and to trap moisture in the meat. You can add bacon when cooking turkey in the slow cooker for the flavour, but be aware it won’t crisp whilst cooking and any juices released from it will run into the stock (if it will be used for gravy).

Why does a turkey crown need to rest after cooking?

Resting meat after cooking allows the juices to redistribute and makes the meat moist throughout.

How long should a turkey crown rest after cooking?

The turkey will continue to cook for a short period after it has been removed from the slow cooker or oven so it’s important to allow it time to rest. Around 25-45 minutes whilst covered with foil will be ideal for a turkey crown.

During Preparation Of Your Turkey

After Your Turkey Is Cooked

Crock-pots can be used to create delicious festive recipes, here are a few more ideas. 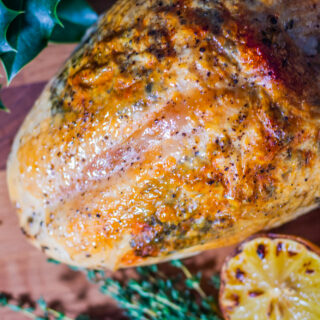 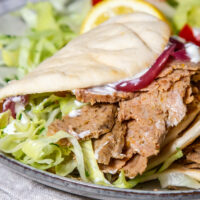 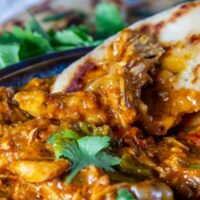 I followed your slow cooker Roast Beef recipe for this years christmas lunch, and it worked out really well.

I've just read through this recipe that I'm now keen to try but I've noticed an inconsistency. The cooking times chart under the heading "How long does it take to cook a turkey crown in the slow cooker?" gives a cooking time for a 1.5kg crown as 3.5 hours and for a 2kg crown as 4 hours, but the recipe ingredients lists a 2kg crown and gives a Cook Time of 3 hours 30 minutes.

Can you tell me which is correct?