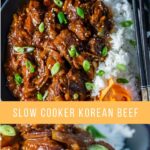 Slow cooker Korean Beef is absolutely bursting with flavour and has the most mouthwatering aroma whilst cooking! Tender pieces of beef are slowly simmered in a dark and delicious hot and sweet sauce with chunks of fresh pear. Served on a bed of jasmine rice it’s a fantastic alternative for fakeaway night.

One of the most famous dishes from Korea is Bulgogi – which literally translates to ‘fire-meat’. It is made with strips of beef steak which are coated in a highly seasoned and sometimes spiced marinade and then cooked over a barbecue.

This dish has since been developed into grill and stir fry variations, and is often referred to simply as ‘Korean Beef’. So it seems only right that there should be a slow cooker version as well, and here it is!

The highly aromatic marinade for Korean Beef is common across all Bulgogi recipes. Its base flavours are soy, ginger, garlic, sugar and sesame, and some variations include fresh pears and other spices.

In my recipe I add chilli flakes for heat and also a Korean paste called Gochujang. This paste is a combination of soy bean, brown rice, salt, red pepper and chilli and it has an amazing depth of flavour which really intensifies the sauce.

I also like to include fresh pear to the recipe as it softens beautifully in the slow cooker and provides contrast against the heat of the chilli and paste.

This is one of my favourite things to cook for fakeaway night in the slow cooker, we eat it far too often. The smell permeating through the house during the day is just divine, and I look forward to eating it all day – it tastes that good!

Here’s what you need to make it.

It also tastes great when served with freshly cooked noodles – udon work particularly well. Toss the noodles in the beef and sauce before serving so they are well coated and glazed.

On the side you could also serve some Kimchi, which is a traditional Korean side dish of salted and pickled vegetables. Although not Korean in origin, I also like to serve some crunchy vegetable spring rolls or gyoza dumplings.

If you would like to add vegetables to the sauce, I like to add red or green peppers (capsicum), or strips of carrot – these should be served quite crunchy. To help the vegetables retain their shape and texture, cut them into chunks and add to the pot half way through the cooking time.

Vegetables will always release varying degrees of water whilst cooking so the sauce will be thinner. Adding a little extra cornflour in the beginning can help with this.

What can you do with leftover Korean Beef?

This recipe will serve four with rice and a side dish. If you do have some leftover beef why not try one of these ideas?

Tips for Korean Beef in the Slow Cooker

Crock-pots can make amazing asian style food. Why not try one of these alternatives?

How do you store Slow Cooker Korean Beef?

Store Korean beef in an airtight container and it’ll stay fresh for three days in the fridge, or up to three months in the freezer. Reheat thoroughly before serving.

Do I have to marinade the beef?

Marinading is an important part of the recipe for two reasons. It imparts flavour into the meat, and vinegar contains acetic acid which works to break down the meat fibres making them soft and tender. If you are short on time, marinade the meat for at least 30 minutes.

Why is my Korean beef tough?

When you slow cook beef the meat can be tough for a few reasons. If it hasn’t been cooked for long enough the meat will still look plump, but it will have a good amount of resistance when you test it due to the fat not having enough time to break down. Leave it to cook a bit longer.

Secondly, the meat may have been over-cooked, it will looker a paler grey and have reduced in size due to the lack of moisture. This is much more common in leaner cuts of meat. Generally, the fattier, marbled cuts are much better for slow cooking and that’s why I recommend Bavette or skirt for this recipe. 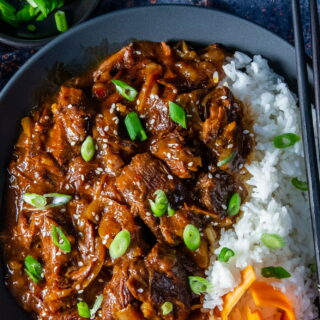 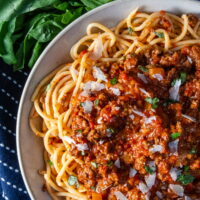 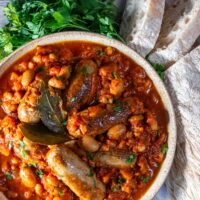 Currently making this for tonight’s dinner! Can left overs be frozen?

Hi, yes they can! Hope you enjoyed it.

This is the third time I've cooked it, a great recipe, and marinating the meat for a longer time means cheaper cuts can be used~frozen packs from Iceland (defrosted first) are tasty and tender.

Very good recipe. I cooked it today using brisket meat sliced into thick strips as I couldn't get hold of flank or skirt.

Meat was very tender and the sauce is great too (although mine wasn't as dark as your pictures, maybe I used the wrong type of apple juice). Next time I'll be adding some fresh Thai birdseye chillies to really bring the fire.

Great to hear that you liked this. Thank you for the review!

I made it exactly as the recipe. I used blade stake (Australian) and served it with Korean pickled vegetables and rice. Next day I mixed the leftover with noodles. A new go to recipe for me.

Serving with the pickled vegetables sounds delicious! Great to hear that you liked this and thanks for the review.

Been wanting to do this recipe for some time and so glad I did once I found where I could find gochujang (finally found some in Asda’s). Marinated overnight and cooked for 7 hours on medium. The dish is full of intense flavours and the beef ( I used skirt) was incredibly soft. Served with wild rice and naan bread. Everyone thoroughly enjoyed this dish and will definitely make again.