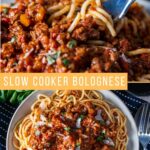 There’s a good reason Spaghetti Bolognese is such a popular dish, it’s tasty and satisfying comfort food, pure and simple. Slow cooker Bolognese is a deliciously rich and flavoursome ragu of minced beef, pancetta, red wine and herbs, cooked in a tomato sauce. Serve with your favourite pasta for a fantastic meal any night of the week.

Spaghetti Bolognese in the Slow Cooker!

As the name suggests, Bolognese sauce or ragù alla bolognese originates from Bologna, northern Italy. It’s a real classic in Italian cuisine, and has become well known globally too. Here in the UK it’s usually served with spaghetti and known simply as ‘Spag Bol’, but in Italy it’s more traditionally served with tagliatelli or linguine.

It’s commonly agreed that the best way to cook Bolognese sauce is low and slow in a big pot for several hours – so it’s perfect for the slow cooker! This gives time for the tomatoes to sweeten, the meat to soften, and the vegetables, herbs and wine to create the most amazing seasoning. Delicious!

As with any well known dish, there are many recipes for bolognese sauce – everyone has their own take on it! My recipe for Slow Cooker Bolognese takes inspiration from Marcella Hazan’s classic recipe.

It has the familiar combination of meat, tomatoes, vegetables and seasoning and the method is kept as simple as possible whilst maintaining a delicious home cooked rustic flavour. I’ve cooked this recipe many times now and always found it a crowd pleaser, so it’s great to be able to share it!

Here’s what you need to make bolognese sauce in the slow cooker.

How to make Slow Cooker Bolognese

There is a little preparation involved in making a great and authentic tasting bolognese sauce. This involves sautéing the vegetables, browning the meat, and reducing the red wine; but it’s only around 15 minutes and I can tell you that it is most definitely worth it for the most authentic and tasty bolognese sauce!

What’s more, after you are finished it’s just a case leaving the sauce to simmer into deliciousness in the slow cooker. No hanging around stirring a hot bubbling pot for hours required here!

Serve the bolognese meat sauce immediately with freshly cooked pasta. Spaghetti or linguine are the usual choices but it will go perfectly well with any type!

I like to toss the pasta in the sauce before serving to coat it and spread the rich meaty flavour through the whole dish. You can also add some shavings of parmesan cheese on top for an extra burst of flavour.

Alternatively, make a big batch of bolognese and save some for another occasion. It reheats perfectly and I think it actually gives the flavours more time to infuse!

If you need some inspiration for side dishes to go with spaghetti bolognese, here are some ideas:

What can you make with leftover Bolognese sauce?

Bolognese sauce is so versatile! If you have leftovers (if!) or you have made a big batch then try one of these ideas.

Here are some ways that you can ensure that your bolognese sauce turns out great every time:

Crock-pots are perfect for making delicious pasta sauces. Why not try one of these alternatives?

Should you brown mince before adding to the slow cooker?

When mince cooks it releases fat and water which doesn’t evaporate when cooking in a crock pot, and so would simply sit on top of the sauce. Browning mince first means this liquid can be drained away before cooking. Additionally, the browning process gives the meat texture; raw mince in a slow cooker sauce becomes so soft that it loses structure.

Why is milk added to Bolognese sauce?

Milk is used to tenderise the meat and also to balance the acidity of the tomatoes in bolognese sauce, giving a greater depth of flavour.

Can I cook pasta in the slow cooker?

Yes, you can add the pasta to the bolognese sauce around 30 minutes before the end of cooking. Remember to add a little more liquid as the pasta will absorb some of the sauce during cooking.

What’s the difference between Bolognese sauce and meat sauce?

They are the same thing, bolognese is a sauce of ground beef or veal often combined with pork then cooked low and slow with tomatoes and seasoning. Meat sauce is exactly the same!

How do you store slow cooker Bolognese sauce?

Store the Bolognese sauce in an airtight container and it’ll stay fresh for three days in the fridge, or up to three months in the freezer. Reheat thoroughly before serving. 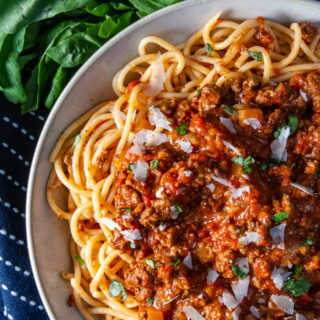 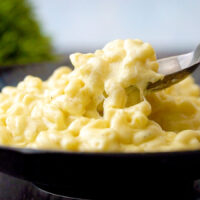 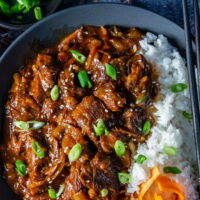 How well does this recipe scale? If I have 3 x 750g packets of mince (and a big enough slow cooker!) can I just multiply all the other ingredients by 3 as well?

Hi, yes the recipe can be easily scaled up. In the top section of the recipe card the servings size can be scaled up or down and this also adjusts the quantities of the other ingredients. In terms of cook time, you will need to cook this for longer as there are more ingredients to heat through however this won't be triple the amount of time, I would give it an additional 1-2 hours depending on the temperature you cook it at and the heat of your slow cooker. Hope you enjoy it.

Hello folks! I have found that adding dried marjoram and thyme (half a TSP of each) enhances the flavours of the dish.

Sounds great, glad you enjoyed it! Thanks for the review.

Absolutely delicious,will definitely save the recipe , thank you .

@Bec, Thanks for the recipe! Is there a substitution you can recommend in place of the red wine?

That's great you enjoyed it and thank you for the review!