This dessert is a classic and delicious ending to Christmas dinner, and why not have the satisfaction of making your own? Slow Cooker Christmas Pudding is a real luxury affair. It’s dark, fruity, moist and so easy to make in advance of the day.

Christmas dinner isn’t complete in our house without a helping of Christmas pudding at the end (with a generous drizzle of brandy cream). It’s something that we always leave room for, no matter how much Christmas dinner we have eaten!

It’s a fabulous pudding because not only is it tasty, but it’s something that can be made before Christmas so there really is no stress of preparing anything on the day.

This recipe is one that has been in our family for several decades so I can assure you that it’s better than any shop bought alternative. It’s packed full of fruit and nuts and has a good measure of brandy and stout thrown in. It really is a treat to eat.

Why make Christmas pudding in the Slow Cooker?

There are several reasons to make a Christmas pudding in the Slow Cooker.

Christmas pudding originates from medieval England where it was a simple pudding of suet, spices, dried fruit, breadcrumbs with fortified wine and was cooked by boiling in a bag.

It was in the Victorian era that a lot of the traditions we know today were brought about. For instance, steaming the pudding in a bowl rather than boiling, and the addition of spirits and ales for extra moisture (and flavour!) in the pudding. Not forgetting the past tradition of hiding a silver coin in the pudding batter to bring the finder wealth and luck.

It was also around this time that it became common place to make the pudding ahead of Christmas on ‘Stir up Sunday’. This is the Sunday before Advent starts, and usually five weeks before Christmas.

Most traditional Christmas puddings contain a blend of dried fruits, nuts, spices, flour, breadcrumbs, suet and a splash of booze! However, it’s the quantities of all of these and added extras that make all of the difference.

This recipe contains a mixture of dried fruits, peel and nuts and gets added moisture from fresh lemon and grated apple. Its rich dark colouring and taste is from the addition of stout (I use Guinness) and light Muscavado sugar. It also has a good measure of brandy which mixes really well with the fruit.

Freshness of ingredients. Use fresh packets of dried fruit. Although currants and raisins are already dehydrated, if they have been sat in the back of the cupboard for a while the chances are they have gone a bit hard and don’t taste as good as a new packet would.

Soak the fruit the night before. Infuse the fruit with the brandy to make it plump and juicy before using it in the pudding batter.

Make it in advance. Christmas puddings are traditionally made weeks before Christmas so that they have time to mature and develop the flavours. However, they can still taste fantastic if freshly made. Don’t be put off if you’ve missed Stir Up Sunday!

Wrap it well. If you do make the pudding before Christmas, once it’s cooled make sure its wrapped up tightly in cling film and stored in a cool dark place to keep it fresh whilst it’s maturing.

Making your own Christmas pudding can seem like an undertaking but it’s actually really simple. You’ll need a 1 litre pudding basin, some kitchen string and cling film. I used this particular pudding basin by Mason Cash.

The day before making the pudding, measure out the dried fruit, pour over the brandy, stir through, cover and leave overnight. This will infuse and plump up the fruit.

On the day of making the pudding, simply add all of the dry ingredients and fruit to a large mixing bowl and stir through with a wooden spoon, then add the liquid (beaten egg, lemon juice, stout) and combine.

If it’s Stir Up Sunday everyone in the house should stir the mixture and make a wish!

Next spoon the mixture evenly into a prepared pudding basin (at this stage the pudding mixture will look pale, this is normal). Loosely cover with cling film, tie with string to secure, then place the bowl in the slow cooker with boiling water.

Once cooked it will be slightly risen, firm when pressed, and a rich dark brown colour.

Crockpots are great for cooking all year round, so why not try one of these alternatives for Christmas?

What to serve with Christmas pudding

Christmas pudding is quite versatile and can be served with many different accompaniments. For example:

Different types of slow cookers output different levels of heat and it may be that a longer cooking time is required. For reference this pudding was cooked in a Crockpot CSC026 with a metal pot which tends to heat up and cook quickly. Ceramic pot slow cookers may take longer so it’s worth checking the pudding after 9 hours.

During the cooking time some of the water may evaporate and it may be necessary to top this up with boiling water. 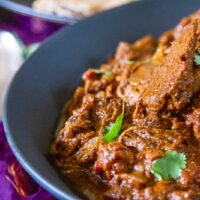 can I use a Pyrex bowl in slow cooker Thank you

Great tip. Shall try slowcooker Xmas pud fr sure!! The lid on my cooker isn’t a tight fit. Wld u suggest foil or t towel under lid to keep steam in?

Hi there, I’m wondering about substitutions. Can I sub out the grated apple for stewed ? What can I substitute for the stout?