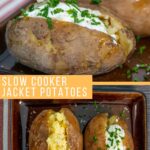 The best jacket potatoes are fluffy inside and have a browned and flavoursome skin. Who would have thought that the slow cooker could make them just like this? Well it’s true! Slow cooker jacket potatoes is an incredibly simple way to make perfect baked potatoes to stuff with a delicious filling for a tasty lunch or to accompany dinner.

How To Make Jacket Potatoes In The Slow Cooker

There has always been a bit of a conundrum with jacket potatoes. They undoubtedly taste best when baked in the oven however, it’s often easiest to cook them in the microwave. So what to do?

Cue the slow cooker. Just wash, prick and season the potatoes, put them in the slow cooker and a few hours later you have superbly fluffy jacket potatoes.

What’s even better is that you can cook as many potatoes together as you can fit in your slow cooker. So if you are looking for a simple meal to feed the masses, a batch of slow cooked jacket potatoes might just be the thing.

OK, so the words ‘crispy skin’ and ‘slow cooker’ don’t exactly go hand in hand but, hear me out. There is a way that you can brown the skin nicely if you just take heed of a few of the technicalities.

Many jacket potato recipes will advise wrapping each individual potato in foil when cooking. I don’t do this, and here’s why.

Wrapping something in foil serves a few purposes; it promotes speedy cooking, protects against direct heat, and it can also be used to lock in moisture. Locking in moisture will not help with crisping the skins. Wrapping entirely in foil guarantees a soft, wetter skin. Especially as potatoes are 70-80% water and a good amount escapes as they cook.

I advise creating a foil liner for your slow cooker and placing all your potatoes on top to cook, allowing the steam to escape from the potatoes. Then use some kitchen roll under the lid to absorb some of the moisture in the pot.

Creating a drier environment will allow the skins to crisp. They are not going to have exactly the same crunch as oven baked (you just can’t create the same dry heat in a slow cooker!) but they will have lovely crisped patches and be perfectly cooked inside.

Why Make This Recipe?

How To Make Them

The steps to make baked potatoes in the slow cooker are incredibly easy, and what’s more they can just be cooking away in the background for the day without requiring much attention!

Jacket potatoes are great, they make a lovely light lunch or are the perfect accompaniment for a main course or BBQ. Try them alongside Slow Cooker Hunters Chicken or Slow Cooker Meatloaf for a delicious weeknight dinner.

With regards to fillings there are countless options, but here are a few to get started:

Beans and Cheese – One of the classics in the UK and loved by kids and adults alike.

Sour Cream and Chive – Cut the potato, add a tablespoon of sour cream, a sprinkle of chopped chives and salt and pepper, done. This is the perfect accompaniment to grilled meats, steaks and BBQ food, bar none!

Tuna and Grated Cheese – One of my favourite lunch options with a side of fresh green salad. I also like to sprinkle some finely chopped spring onion on the top for extra flavour.

They are also perfect for party occasions when the weather is cooler, such as bonfire or halloween gatherings. You can have them keeping warm in the kitchen whilst everyone enjoys the andfestivities.

Also, why not make a batch of Slow Cooker Chilli con Carne or Slow Cooker Pulled Chicken for an easy and flavourful topping?

There are many options for jacket potato fillings but a question that often gets asked is, can you make baked sweet potatoes in the slow cooker? Well, yes you can! Sweet potatoes are very nutritious, containing high quantities of beta carotene, vitamin C and B6 as well as protein and fibre. They also taste great. Prepare them in the same way as white potatoes – be aware that they are slightly denser and can come in larger sizes so may take longer to cook.

Looking to add even more flavour to your baked potatoes? Try twice baked potatoes. When the potatoes are cooked simply scoop out the fluffy potato inside, mash it with some butter, cheese, chopped spring onion and seasoning, then spoon the mixture back into the potato shells topping with a little more cheese. Put these back into the slow cooker for 30 minutes until the cheese is melted. Add chopped crispy bacon for an amazing extra burst of salty flavour!

Dry the potatoes throughly. This will remove as much moisture as possible and help the skins to crisp.

Foil. Don’t completely wrap your potatoes in foil completely, you don’t want to steam them. Keep them open to develop crispy patches on the skin.

Kitchen roll. Use kitchen roll under the lid of the pot to soak up the water emitted from the potatoes. Remember, the more potatoes in the pot, the more liquid there’ll be. You may need to change the paper part way through cooking.

Type of potatoes. Choose floury varieties of potato. Also the appearance of the potatoes once cooked can vary between varieties (some skins turn darker than others i.e. Melody variety turn deep brown, whilst Maris Pipers a golden brown).

Size of potatoes. Choose medium sized rather than enormous potatoes. These not only cook better in the slow cooker but it’s easier to fit more into the pot.

Prick the potatoes. To help them cook evenly, allow moisture inside the potato to escape and produce that fluffy texture.

Turn them over. Crispy patches tend to develop best on the bottom where the potato touches the pot, so turn them over half way through cooking.

How To Store Them

Cooked jacket potatoes will keep in the fridge for up to three days. Once cooked just wrap them in cling film or put in an airtight container and place in the fridge.

Did you know you can also freeze pre-cooked jacket potatoes? Once cooked and cooled, wrap them up in cling film (without any fillings) and freeze. Thaw them in the fridge overnight and then heat thoroughly.

What type of potato is best for jacket potatoes?

To make the perfect jacket potato you are looking for a potato that is flavoursome, floury (for that fluffy centre) and grows to a good size. There are a few varieties that gardeners and mass producers prefer such as Vivaldi, Melody, Russet and King Edwards. However most supermarkets have taken away the guess work and offer pre-packaged ‘baking potatoes’ which are of the best size and have the right properties for making jacket potatoes.

Should you slow cook jacket potatoes in foil?

Wrapping a potato in foil traps the moisture released when cooking and means you are essentially steaming the potato – so the result will be a soft baked potato with softer, wetter skin. To achieve a potato with a fluffy centre and crispy skin, leave off the foil and season well with salt, pepper and oil.

Potatoes are often prepared in what can be tasty but unhealthy ways by frying and adding copious quantities of salt and fat, which is what sullies their reputation. So it’s really down to the preparation of the potato, and slow cooker jacket potatoes are a great way to healthily include them in your diet.

How long do jacket potatoes take to cook in the slow cooker?

The potatoes will be cooked in 6 hours on high or 8 on low. However if you want them to be more crispy on the outside then leave them in an extra hour.

How many potatoes can you fit in a slow cooker?

In a large 5.6L oval slow cooker I can fit 4-6 potatoes. In a smaller round 5L slow cooker 3-4 potatoes will fit. It’s best to not overcrowd the pot as it will take longer to cook the potatoes and the skins will not crisp as well. 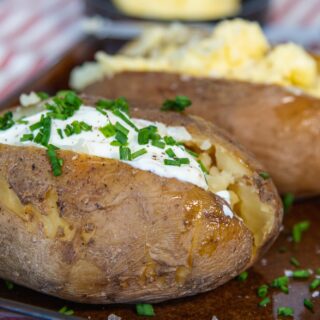 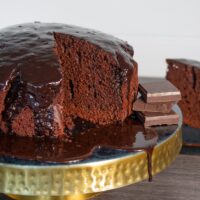 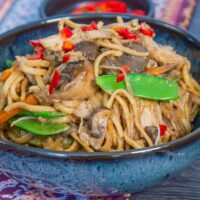