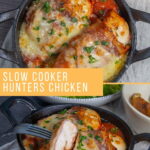 Slow Cooker Hunters Chicken has juicy chicken breasts wrapped in bacon and bathed in a smokey barbecue sauce, then covered in melted cheese. What’s not to love? Make this delicious pub classic easily at home in your slow cooker.

Hunters Chicken in the Slow Cooker

Hunters Chicken is a famous British pub meal which is both simple and incredibly tasty, some restaurants also refer to it as ‘Chicken New Yorker’. Interestingly, the recipe name is also given to an old and well known Italian casserole, ‘Chicken Cacciatore’. As cacciatore translates to hunter in English it’s easy to confuse the dishes but they are indeed distinctly different!

Slow Cooker Hunters Chicken is a fantastic crowd-pleasing dish that you can make quickly in the slow cooker with minimal preparation. What’s more, the recipe includes a delicious homemade barbecue sauce that is just the right amount of sweet, smokey and tangy.

Why make this recipe?

Here’s what you will need to make Hunter’s Chicken.

For the wrapped chicken

Smoked bacon – Smoked bacon has a deep distinctive taste and wrapping the chicken in it imparts the flavour.

Cheese – A blend of grated mature cheddar and mozzerella is my favourite combination for topping this chicken. The cheddar brings a sharp, full flavour and the mozzarella adds creaminess and creates fabulous thick, stringy melted cheese.

Salt and pepper – Seasoning for the chicken.

For the slow cooker BBQ sauce

Passata – Sieved plum tomatoes. I like the Mutti variety for their sweetness.

Liquid Smoke – The key ingredient to an authentic and smokey flavoured BBQ sauce. Try and get this if you can, it really enhances the flavour of the sauce. I use Stubbs brand which is available in most supermarkets.

Seasoning – A blend of garlic, mustard, paprika and chilli powders with a pinch of salt and pepper.

Maple syrup – adds a rich and malty sweetness. Use honey as an alternative.

You can use shop bought BBQ sauce for this recipe, if you prefer. One of my favourite brands is Bullseye Original BBQ sauce.

Here’s a step by step guide of how to make it. Full detailed instructions can be found in the recipe card at the bottom of the page.

Thickness of BBQ Sauce – as the chicken cooks in the BBQ sauce it releases juices that thin the sauce. The dish will still taste fantastic but if you do prefer a thick BBQ sauce and have the time, transfer the sauce to a pan and simmer for 10 minutes to reduce.

Check the chicken is cooked – You can pierce the fattest point of the chicken breast with a sharp knife, the juices should run clear, and the meat be white. I also use a meat thermometer; insert the probe into the thickest part and ensure the temperature is 75°C (165°F).

Increasing quantities – If you’re cooking more pieces of chicken, it may be necessary to stack the chicken on top of each-other in the pot. If this is the case adjustments to the quantity of sauce and cooking times will be needed – click the number of servings in the recipe card to calculate quantities.

Kitchen Roll – Placing kitchen roll under the lid helps to absorb moisture from within the slow cooker and prevents the cheese from sweating. Do not leave the pot unattended whilst doing so. As an alternative to kitchen roll use a clean dry tea towel, washed in un-fragranced detergent.

Cheese – I like the combination of cheddar and mozarella as they melt well and taste great together. When considering alternatives, look for cheeses that also melt well (avoid halloumi, feta, edam etc for this reason). Dairy free cheese can also be used if preferred.

Bacon – I use whole rashers of smoked bacon but cured or unsmoked rashers also work well and produce a subtler flavour. Streaky bacon can also be used but these tend to be thinner, fattier strips.

Chicken – As an alternative to chicken breast you could also use skinless and boneless chicken thighs or turkey escallops.

Liquid Smoke – If you don’t have liquid smoke then use smoked paprika instead of sweet in the sauce. This will give it a sweet, smokey edge.

What type of bacon can I use for Hunters Chicken?

Smokey bacon rashers give the chicken an enhanced BBQ flavour whilst cooking. Streaky bacon has a similar flavour but the rashers are narrower and have a higher proportion of fat. You can also use cured or unsmoked bacon rashers, if you prefer. I’ve even been known to use thickly cut slices of ham – it works great when you’re out of bacon!

What type of vinegar do I need for BBQ sauce?

I use apple cider vinegar as it’s fruity as well as tart. Alternatively use red or white wine vinegar, or rice wine vinegar.

What’s another name for Hunters Chicken?

Some restaurants in the UK refer to the dish as Chicken New Yorker; it’s basically the same recipe consisting of chicken wrapped in bacon, with melted cheese and BBQ sauce.

Can I use shop bought BBQ sauce for my Hunters Chicken?

Yes absolutely, simply replace the homemade BBQ sauce with shop bought like for like in the recipe.

Here are some suggestions of other delicious British dishes to make in the slow cooker! 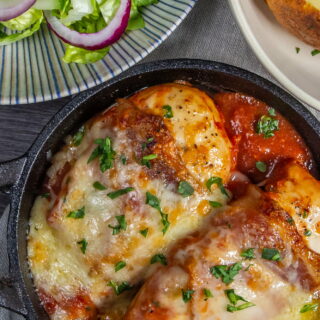 For the BBQ sauce