Hands up if the first thing you look for an in Indian restaurant is a Chicken Tikka Masala! Yep, me too, and a Peshwari naan! You literally can’t go wrong with a slow cooker Chicken Tikka Masala – it’s a classic British Indian dish, and for a good reason. Full of flavour, healthy and a guaranteed crowd pleaser.

History of the Chicken Tikka Masala

There are many stories about the origins of the Chicken Tikka Masala – but the one I like to believe is that it was invented in a restaurant named Shish Mahal in Glasgow. Supposedly a man ordered a chicken curry, and sent it back because he thought it was dry.

The owner, a Pakistani chef named Ali Ahmed Aslam, improvised a sauce with tomato soup and spices. It was promptly sent back to the table and the man absolutely loved it – so much so that he returned again and again with his friends, and it soon became a dish on their menu. The rest, as they say, was history.

The list of ingredients is long – but don’t be put off by thinking this is a difficult slow cooker Chicken Tikka Masala to make – it’s easy peasy! All of the ingredients are available from any good supermarket.

On that note, don’t be tempted to use spices you have had in your cupboard for years – whilst it’ll still taste good, new spices will make a massive difference to the overall flavour!

This was the very first curry I tried in the slow cooker, so the recipe you see here has had many years of tweaks and refinement…and if I may say so myself, it’s pretty damn good.

I really hope you enjoy making and eating this as much as I did, you’ll be hard-pressed to tell the difference between this recipe and a take away.

Chicken Tikka Masala will keep in the freezer for up to three months. Defrost overnight in the fridge, and ensure it’s piping hot all the way through before serving. If it looks a little dry you can loosen up the sauce with a little hot water before reheating.

Alternatively, it’ll keep in the fridge in an airtight container for up to three days. 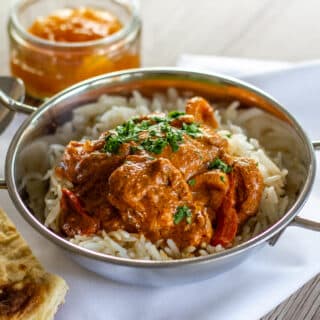 Just made this dish for my family, absolutely fantastic. Great flavour, not too spicy and having it prepared in a slow cooker made the chicken melt in the mouth. The kids have already asked when I can do it again!

That's great to hear that everyone enjoyed this! Thank you for the review.

First time I've made this and it definitely will not be the last, the flavours were absolutely amazing. Been asked to make it again very soon by family

Oh my goodness. So easy to make and was utterly delicious - much nicer than the takeaway one we had New Year’s Eve. My husband is a fussy eater - his normal response to dinners when asked if it was ok, all he mutters is ‘was alright’. After this meal he declared it was the best curry he’s ever eaten. Very, very high praise!

That's fantastic praise indeed! Thanks for the review and glad you both enjoyed it.

Yes, that will work just fine! Hope you enjoy it.

I have just now long put this in the slow cooker, I thought capsicum peppers you meant red chilli ? ones ...not panicking thinking maybe you meant red bell peppers ...so the sweet ones...hoping this won’t be too hot now and spoil the curry?