Slow Cooker Cottage Pie is one of those staple dinners that’s always lovely to cook whatever the weather. It’s also one of those dinners you end up having for another meal later in the week, and it tastes even better than it did first time around!

We love this recipe because it’s really easy to hide the veggies – we’d struggle to get our little one to eat leeks but he unknowingly scoffed two massive portions of this.

Even better, you can make it a day or two in advance and keep it in the fridge if you need to. Cooling it before reheating also means that the layers keep better shape when you serve it, although we didn’t bother because we just wanted to eat it!

Can you make Cottage Pie in advance?

Absolutely! Cottage Pie is a great pie to cook if you want a home cooked dinner with minimal fuss in the evening. As an additional bonus, by cooking in advance the layers will keep better shape when you serve it.

Once the pie is cooked, allow it to cool, cover, and put the whole dish into the fridge.

How do you reheat Cottage Pie?

Simply put it in the oven (covered) for 20-25 minutes at 160C. Check it’s piping hot all the way through before serving.

If you’re reheating more than a single portion you may find it easier to portion it before reheating to allow the heat to penetrate.

Do I need a slow cooker to make Cottage Pie?

Whilst the taste will be better by slow cooking the ingredients, it’ll still taste great if you replace the slow cooking by 45 minutes of simmering. Check the pan after 30 minutes and if you still have a lot of liquid, increase the heat to reduce the sauce a little. 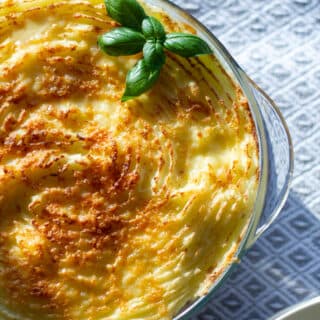 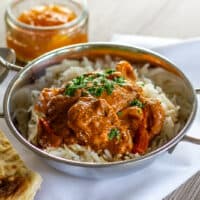 Well I haven’t tried it yet but I completed the recipe per instructions. Put it in the slow cooker and found the mushrooms were still on the counter! You didn’t mention them in the Method. So mine will be minus the mushrooms. Lol.

Thanks for pointing that out! I've fixed that now. Hope you enjoy.

Delicious. Added a few more vegetables. The long, slow cooking added a depth of flavour I can't get with just pan cooking.

Thanks for the review and great to hear that you enjoyed this.

What happened to the mushrooms?

Can I freeze this?

Yes you can freeze it. Allow to cool, portion up and then reheat thoroughly.

I made this this week. A great recipe thank you :) I made some adjustments: I added red wine as I put it into the slow cooker I added garlic to the vegetables when frying Instead of the cheesy mash top, I made the mash without cheddar cheese and then made a crunchy topping by mixing ground almonds, grated Parmesan, breadcrumbs, pepper, thyme and olive oil and then sprinkling over the top before grilling.

I’ll be making this again this weekend but this time I’ll make a big batch to freeze. :)

The topping for the mash that you made sounds delicious!:-) Great to hear that you enjoyed this and thanks for the review.