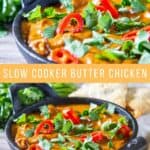 The Friday night fakeaway is a thing in our house. Why pay an absolute fortune for a takeaway chicken curry when you can make a better tasting one yourself? This Slow Cooker Butter Chicken recipe (or Murgh Makhani in Hindi) features regularly on our fakeaway recipe list. Read on to learn how to make the perfect crockpot curry!

Butter Chicken originates from a restaurant in the Punjab region of Northern Pakistan called Moti Mahal.

When the owner Kundan Lal Gujral realised that dry pieces of Tandoori chicken would waste quickly with no refrigeration, he added them to a fragrant gravy consisting of spices, butter, yoghurt and tomatoes, cooking them slowly over a low flame.

Butter Chicken was born! It later became popular in Indian restaurants across the world.

What ingredients do I need?

This crock pot butter chicken recipe is made from ingredients you’re likely to have in the cupboard, which means no special shopping trip. The sauce in our version consists of tomato, yoghurt, and coconut milk.

The spices traditionally used in a butter chicken curry are the following blends:

…and then the addition of these individual spices:

If you’re looking for a super-tasty but easy to make curry, this is the one to choose!

Start by sealing the chicken in a pan, and transfer it to the slow cooker. Using the same pan, gently fry the onions and garlic. This process will increase the sweetness of the onions, and your curry!

Follow up by combining the spices, yoghurt and coconut milk in a bowl, and mixing it up well. Transfer the mixture to the slow cooker, and give it a good stir.

Then all you need to do…is wait. It’ll be worth it!

Can I use chicken breasts for Slow Cooker Butter Chicken?

However; chicken breast will work great, just make sure you reduce the cooking time accordingly (details in the recipe card below).

Do I need a crockpot to make Butter Chicken?

The taste will be better by slow cooking the recipe (and is the traditional way of making Butter Chicken), but if you’re pushed for time it’ll still taste great if you replace the slow cooking with 30 minutes of simmering on a hob.

If you’re using chicken breast, set the chicken aside after searing, and re-add it 10 minutes before the end – this will ensure the chicken stays succulent and doesn’t dry out.

Crockpots are great for making curries. Why not try one of these alternatives from around the world?

Can I freeze leftovers?

Defrost it in the fridge over night, and ensure it’s piping hot all the way through before serving. As is always the way with defrosted meals – Indian Butter Chicken tastes even better second time around as the flavours have had even longer to meld together!

This post was originally published in 2014, we updated it in August 2019 with new photos, then even more new photos and a video in February 2020. The recipe is still exactly the same, we wouldn’t dare change it! 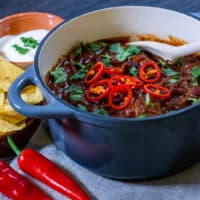 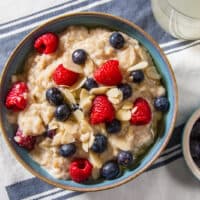 I was a bit short on time so I didn't even pre-fry the onions/garlic, nor sear the chicken, but this turned out amazingly well. So flavoursome and pleasantly spicy (I didn't skimp on the measurements!) without being too hot. Every curry I have tried from this site has been a winner, and this one will definitely be added to our favourites.

How long would you slow cook chicken breasts for?

Hi. I love this curry and make it regularly but for some reason I can't alter the servings for the correct measurements.

Did this today, omg, it was insanely good. For something that is so easy to prepare it is so full of flavour and smells and looks divine. Some family members can't do "spicy" food but they absolutely loved this, it's definitely going to be cooked again, fairly soon I'd imagine!

Thanks for such a great review and so pleased that you all enjoyed it!