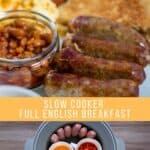 It might sound completely crazy, but it really is possible to make a slow cooker full english breakfast. Rather than having to slave over a hot pan in the morning, simply prep before you go to bed and wake up to a beautiful cooked breakfast ready to eat!

The slow cooker full english breakfast was apparently created by a lady called Sonia Cheetham. She came up with the idea to save time when cooking breakfast for her two teenage daughters.

It was then posted to a Facebook group, went viral, and subsequently picked up by the BBC, The Sun, and various other British news sites.

How to make breakfast in a Slow Cooker

Making breakfast in a slow cooker is easy, however, every ingredient has its own method for perfection:

We didn’t cook these when we shot the photos, but you can use the following methods for additional ingredients:

What should I serve with a Slow Cooker Fry-Up?

No slow cooker full english breakfast is complete without fresh toast, ketchup, brown sauce (yes, both) and a fresh mug of tea. Ringtons tea, if you’re curious. You can take my wife out of the North, but she’s bringing her tea with her!

If you’re not a fan of scrambled eggs, then simply make fresh fried or poached eggs in the morning to go with your fry-up.

If you’re really hungry, then serve up a small bowl of slow cooker porridge as a starter! 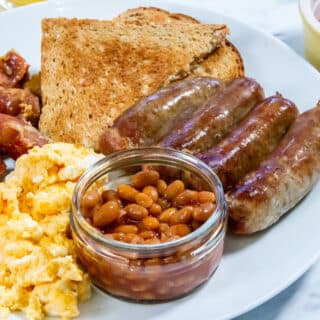 Use whatever sausages you like, but not chipolatas as they’ll cook too quickly and burn.

Use good quality bacon that’s cut to a reasonable thickness. As above, it’ll burn if it’s too thin.

The bigger the slow cooker you have, the better! We recommend the Morphy Richards 6.5L Sear and Stew slow cooker for this recipe. A slow cooker with a non-stick works best as it’ll prevent the sausages and bacon sticking. Butter will suffice otherwise. 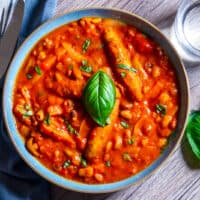 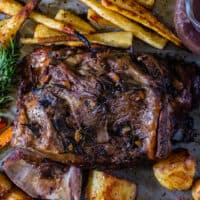 As with most people, a busy life means you don't have much time in the morning. I thought I would try this as an experiment. It was not a success, although edible, and will not be done again. What is good though is showing the versatility of a slow cooker, and I enjoy working through your recipes. In some cases, a fry up is king!

Can you cook black pudding in the slow cooker? i'm not a fan of mushrooms but would love to add B/puuding to this mix

I tried this. Although prior plausibility didn't give me much confidence, the upside of a slight possibility of success motivated me to try. I was right to be skeptical. I added bacon (rolled up and propped up against the side of the slow cooker), sausages (propped up), black pudding (propped up), baked beans (in bowel), tomatoes (halved in a cup) and eggs beaten with some milk.

Results: 1) The bacon just dissolved into a gooey lump with stuck to the wall which needed serious scrubbing to clean. Tasted awful. 2) The sausages were chewy with an overall unpleasant texture. 3) The black pudding turned crumbly and dry (I've found black pudding difficult to ruin but this clearly is the way). 4) Difficult to screw up baked beans but the slow cooker did as it created too much evaporation. 5) The tomatoes just fell apart into an inedible liquidy mush. 6) Compared to the above results the eggs were a real failure. They turned into a concrete-like block in the cup which I couldn't even clean up so I just had to toss the mug.

I was clearly correct with my doubt about this method and would not recommend it to anybody who is not a masochist.

Can you do this on a medium heat for 4/5 hours?

Would this timing work with less ingredients in a 1.8l crockpot?