Slow Cooker Doner Kebab is an easy make at home version of the classic Turkish kebab. Perfectly seasoned lamb cooked until tender, sliced thinly and served in a flatbread with crunchy salad – delicious!

Who says that the slow cooker is only useful for casseroles and curries? There are plenty of other recipes that work fantastically well in them. One of which is a kebab!

The word kebab actually describes the cooking method of skewering meat, fish or vegetables and cooking slowly over coals. There are several different types of kebab from various parts of the world, for example Middle Eastern Shawarma, Greek Gryos and Souvlaki, and of course one of the most popular, Doner kebab from Turkey.

Personally, I think the doner kebab’s reputation here in the UK of only being eaten at the end of a night out is unfair! It’s actually a really tasty meal and perfect for sharing.

As you may have seen, doner kebabs sold in shops are always cooked on a giant, slowly rotating skewer called a rotisserie. However, this is not a process that is possible to copy in the slow cooker!

My technique produces delicious results, is easy to prepare, and even better, works in the slow cooker.

Here’s what you need to make it.

How To Make It

Here’s a step-by-step guide on how to make a homemade Doner Kebab in the slow cooker.

I serve a fakeaway doner kebab exactly as you would buy them from a shop, in a flatbread with crisp salad, pickles, and a creamy yogurt and garlic sauce drizzled over the top. I really enjoy the combination of the crunchy salad (I usually opt for iceberg lettuce and sometimes pickled cabbage) and the soft lamb and flatbread. It’s a very satisfying thing to eat!

This recipe will feed 6 people if sliced nice and thinly and served in pittas or flatbreads with salad and sauce. I also like some fries on the side!

If you do happen to have some kebab meat leftover, here are some alternative meal ideas.

Saying that, it’s so tasty that there is absolutely nothing wrong with simply having another kebab the next day!

Is a doner kebab healthy?

It depends on how it’s made and what it’s served with! Slow cooker doner kebab is made with lamb mince which is naturally fatty. However, much of this fat is actually drained away during the cooking process. Similarly, the level of salt in the dish is kept to a minimum. Served with a crisp green salad and a garlic or chilli dressing, this homemade kebab can actually be quite a healthy option.

Can I reheat doner kebab?

Yes, simply slice the kebab meat and then thoroughly reheat in either the microwave or in a frying pan.

How do I store leftovers?

Cover the leftover kebab in cling film and store in an airtight container. It’ll stay fresh for three days in the fridge.

Crock-pots can make amazing asian style food. Why not try one of these alternatives? 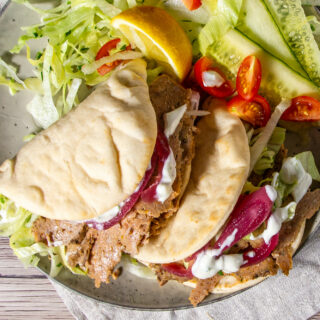 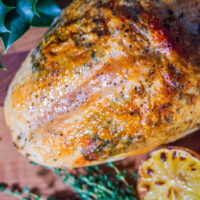 Missus and me just ate best kebeb ever.Fresh and delicious and we new what was in it!Thanks

So pleased that you liked it! Thanks for the review.

Thanks for the great review and pleased you both enjoyed it!

This is pretty good, 8 added some lemon juice as well, thanks for the recipe, it's nice to know what's in the kebab as well!!😁

It is! Thanks for the review and so pleased that you liked it!

Can you use a mix of beef and pork mince

Hi, yes you can! Hope you enjoy the recipe.

Is it OK to freeze leftover donor kebeb? There is only 2 of us so I often cool a whole recipe and freeze the leftovers for another time, adding this info would be great for me ❤

Hi, yes it will freeze for up to three months either as the full kebab or carved into slices. Allow to thaw fully and then reheat thoroughly. Thanks for your question, hope you enjoy it!

Hi. Could you please tell me the quantities of each ingredient. Thank you.

If you hit the 'Jump to Recipe' button at the top of the page it will take you directly to the recipe card which has all of the information. Hope you enjoy!