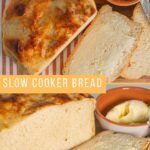 Making bread at home is such a satisfying thing to do and this recipe for slow cooker bread results in a delicious cob loaf which is soft on the inside with a beautiful golden crust. Just as it should be.

How to make bread in the slow cooker

Personally, I think bread-making is an incredibly fulfilling process and when the resulting bread tastes fantastic – the reward definitely outweighs the effort. This is even better when I can achieve this in my slow cooker! Using the slow cooker for baking also means that I get fresh bread aroma lingering through the house just that bit longer.

Making bread needn’t be the daunting task that it may seem. Yes, there are the steps to knead, proof and bake the bread but each phase is very straightforward. What’s more, in this recipe I also include plenty of tips and specialist instructions for the slow cooker.

Note that I say, special instructions for the slow cooker. Because whilst I maintain that baking in the slow cooker is simple, you do need to heed the fact that it is different to using an oven and can bear different results, even from the same recipe.

This is because an oven creates a dry, high heat whilst slow cookers cook at a lower temperature and trap moisture. There is no getting around it, these environmental differences will affect the bake. So the best thing to do is be prepared!

The method in my recipe is especially tailored for the slow cooker so just follow the steps and you’re good to go!

Why make this recipe?

Here is what you will need to make bread in the slow cooker.

How to make slow cooker bread

Here’s a step by step guide of how to make it. Full detailed instructions can be found in the recipe card at the bottom of the page.

Remove the loaf by lifting the edges of the baking paper.

To create a golden crust on top (which you just won’t get in the slow cooker!) briefly place the dough under the grill. See picture below for before and after the grill. As you can see it’s worth it for that beautiful golden colour!

Slow cooker bread is the perfect partner for soups and casseroles like our slow cooker tomato soup and slow cooker sausage casserole but it also is lovely served simply with butter and jam.

This loaf also slices really well, so can also be used for sandwiches and toast. It’s an all round winner!

Bread flour – Bread flour has a higher concentration of protein creating a stronger flavoured loaf with a springy texture. Plain flour can be used as an alternative, it will have a more ‘crumby’ texture but it will still taste delicious!

Water Temperature – The water needs to be lukewarm for the yeast to activate, which is about body temperature so if you dip your finger in you shouldn’t feel a temperature difference.

Kneading – Knead for the required time to properly combine the ingredients and develop the gluten structures. Not taking time to do this can result in loaf the being dense and sinking in the middle. If using a mixer I still knead dough firmly by hand for a few minutes at the end. This also means I can make sure it feels the right consistency. This short video from King Arthur Flour is a good guide for kneading technique.

Kitchen towel – Slow cookers retain moisture as they are an enclosed cooking environment. A few pieces of kitchen towel under the lid will absorb moisture to avoid soggy, dense bread.

Baking parchment – Line the slow cooker with baking parchment to prevent the bread sticking to the pot. It’s also much easier to safely lift out at the end.

Fermenting ‘proofing’ the dough – The temperature of the environment whilst proofing dough will affect the speed in which it rises. In a warm, sunny kitchen dough can rise in 45 minutes to an hour. In a cooler environment more time will be needed so factor this in before you start. Also be aware that over-proofing (if it’s too hot or the dough is left for too long) can cause the yeast to expire itself before baking resulting in a dense crumb structure, particularly at the bottom.

Browning – Bread baked in the slow cooker won’t have a golden crust on top, it’s simply not a dry enough environment to create this. So I always put it under the grill to brown after baking. I use the grill not the oven because I just want to continue cooking the crust (the oven would continue to bake the whole loaf).

Oil – After the loaf is cooked and browned under the grill (whilst it’s still hot) I like to paint it with butter or oil immediately. This adds a gleam to the loaf and removes any dryness from the crust.

Flour – You can substitute the bread flour with plain (all purpose) flour. Wholemeal flour can also be used instead of white bread flour if preferred.

Flavourings – Add dried herbs to the bread dough to create a slightly different flavour profile. Rosemary and dried garlic granules work nicely – just use a moderate amount of each as to not overpower the bread (1/2 tsp). I also like the pre-made sachets of bread seasoning that you can buy such as the Allinson’s Additions bread flavour sachets.

Toppings – Sprinkle over some grated cheddar cheese and freshly cut chives in the last 20 minutes of baking for a delicious topped loaf.

What are the main ingredients in bread?

Flour, water, yeast, sugar and salt are the core ingredients for bread. You can create an enriched dough by adding milk, butter, oil or eggs which will alter the taste and texture.

What is the best type of flour for bread?

Bread flour is best for bread. It has a higher protein (gluten) content than regular flour which creates a more elastic dough with springy fibres which allow air to pass through gently. Plain (all purpose) flour can be used but the resulting loaf will have a denser, crumbier texture.

Why do we add oil to bread dough?

Oil is added to loaves to improve the texture by adding moisture. It also makes the bread stay softer for longer.

Why do we knead dough?

Kneading dough is a way to thoroughly mix the ingredients so that the yeast is distributed evenly throughout. It also allows the gluten in the flour to mix with the other ingredients and form strands which give the bread shape whilst baking and allow air to pass through.

Technically, proofing is the term used to define when the dough is shaped into a loaf and allowed to rise just before baking. Saying that, the term is often also used for the first time dough is rested whilst the ingredients ferment. Proofing allows gluten structures to develop and air to distribute through the dough as the yeast feeds on the sugars, essential for the structure and rise of the loaf.

Why do we use yeast in bread dough?

Yeast is a simple, live microorganism. It is used in bread because when it feeds on the sugar in the dough it slowly releases carbon dioxide gas which creates air pockets in the dough, thus rising (leavening) the loaf. Bread made without yeast is called unleavened bread.

Why is yeast activated in water before being added to bread dough mixtures?

Dried active yeast needs to be re-hydrated in a luke-warm, sugar water solution before baking. Adding it to water awakens the yeast and it begins to feed on the sugar releasing gases which creates a thick, milky foam. This process also indicates whether the yeast you have is still alive and good to bake with!

Here are some other ideas for baking in the slow cooker! 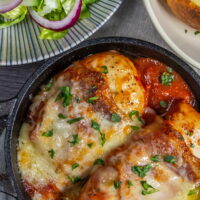 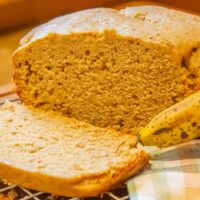