If you want to come home to the most amazing aroma from your kitchen, this is the recipe to cook! Slow cooker Lamb Tagine is packed full of fruit, vegetables and spices which all fuse together to create a dish which looks as good as it smells!

What is a tagine?

Firstly, it refers to the traditional North African earthenware dish. It consists of two pieces – a shallow and wide bowl, and a funnelled top. They’re typically made of clay or ceramic, both glazed and unglazed.

Secondly, tagine refers to the slow cooked dish you see here. It’s not always cooked with lamb – sometimes even poultry or fish, but will usually contain fruit and vegetables.

The ingredients are slowly simmered over a consistent temperature in a little liquid. The tall lid on the dish acts as a means to trap the steam and keep the stew moist. Very similar to cooking in a slow cooker!

There are a large selection of ingredients which can be included, the most popular being sweet and sour combinations which are an amazing blend of fruit, meat and spice (cinnamon and cumin are the signature).

This slow cooker Lamb Tagine recipe is a brilliant example and as well as tasting delicious, is full of colour.

It creates quite an impact when you serve it!

What cut of meat should I use for Slow Cooker Lamb Tagine?

It’s best to use lamb neck when slow cooking things like tagines and stews. It’s really flavourful, and contains plenty of fat to break down and keep the meat moist.

As an alternative, look for offcuts which have a bit of marbling through them, or even lamb shoulder. Bear in mind that shoulder requires a little extra cooking time to ensure you get tender juicy meat!

What can I serve with a tagine?

Rice or cous cous work well served with a tagine, and is usually what we choose. You could also opt for bread and traditional north African side salads if you’re feeling a bit more adventurous!

Can I freeze leftover Lamb Tagine?

Yes, absolutely – freeze once cooled, then it’ll keep in the freezer for three months. To reheat, defrost overnight in the fridge and then heat until piping hot all the way through.

Alternatively you can keep leftovers in the fridge for up to three days. 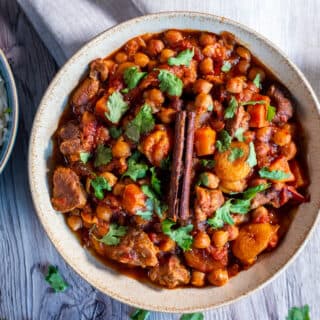 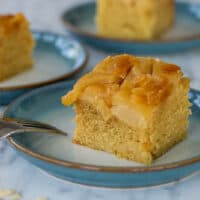 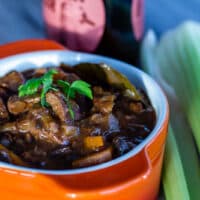 I skipped the apricots because the OH not a fan of sweetness in food. Used runnerbeans from last year's harvest. Served on top of mashed potatoes. We both had seconds! The flavours of the spices work really well in this recipe.

Sounds lovely! Thank you for the review.

Made this for lunch today with a simple couscous salad. We had friends over and it was oddly lovely sitting outside on the patio with bowls of this and freshly made flatbreads. Used diced leg as it was all the butcher had by the time I got there yesterday afternoon. I did add a heaping spoon of rose harissa just because I had it and I love the fragrant heat it brings. Foolproof recipe, and perfect for entertaining as you aren't running about trying to cook as people arrive.

Thanks for the review. Great addition, I love the depth that harissa brings to a dish!

I made this last night. Was very tasty but unfortunately the fella that lives in this house didn't "like" the chick peas. Fella thing I guess! Will keep this recipe, use it again but will substitute chicken peas with something more palatable for the mere male. 😊

Pleased to hear that it was enjoyed other than the chickpeas! 🤣 Thanks for the review.

Hi there Bec. I have this in the oven now and it's making the house smell divine! Can I ask what amount the nutrition is based on please? Also I'll be adding some mango chutney instead, as I'm out of apricots. Fingers crossed it works out well 😄

Thanks for the recipe

The smell from this is amazing! Hope that you enjoyed it. The nutrition information is per serving.

Really easy with the preparation Wouldn’t change a thing My partner absolutely loved it Will surely make it again when the future in laws come to dinner :-)

That's great to hear and hope that everyone enjoys it the next time you make it! Thanks for the review.