It may sound a little but obscure, but Slow Cooker Gammon in Cola really works! Using the cola as a cooking stock adds a sweet malty taste to the meat which really enhances the flavour.

Gammon is a great joint of meat to serve as an alternative to more traditional slow cooker roast beef or slow cooker lamb shoulder.

I like to think it’s fairly foolproof with the cooking too, as you start off by simmering the joint in liquid which keeps it nice and moist.

Coupled with a honey and mustard glaze, it’s a really delicious combination!

How do I prepare Slow Cooker Gammon in Cola?

Slow Cooker Gammon in Cola is easy to prepare and really is just a case of putting the ingredients in the slow cooker and leaving it to cook for the day.

Once the gammon is cooked, remove it from the stock, score and glaze before roasting. I think it’s quite traditional to score the fat in diamond shapes and press cloves into the corners.

I certainly remember my Grandma cooking gammon this way when I was younger and I think it’s still a beautiful way to prepare it now!

It not only adds quite a decorative touch which looks great once roasted, but also the flavour of cloves works so well with gammon it’s worth taking this extra step!

Roast for 30 minutes in the oven, basting half way through and you’ll end up with a beautiful golden gammon joint.

What type of Gammon should I buy?

Most butchers and supermarkets sell pre-rolled, uncooked gammon joints in both smoked and un-smoked varieties.

This recipe requires un-smoked gammon; otherwise the flavours of the stock and glaze will be obscured by the smoke.

In some areas, gammon is pre-salted depending on the type of cure that the butcher has used. In these cases, the meat should first be soaked overnight (longer for large joints) to remove some of the salt before cooking.

Usually soaking isn’t necessary but it is worth checking when you purchase whether this should be factored into your preparations.

Another thing to check when you are buying gammon is whether the joint is one whole piece of meat. Sometimes the roll is created by a few cuts which are more likely to fall apart and mis-shape during cooking.

One piece rolls are preferential as the moisture will stay locked in, and it’s easier to carve when serving!

Crockpot is a brilliant way to cook a gammon joint. Why not try these other tasty ham recipes?

What’s best to serve with Gammon?

When I make Slow Cooker Gammon on a weekday I serve it simply with chips, egg and salad, but it also works well as a Sunday roast with all of the usual trimmings.

It’s also popular to make this over the Christmas holidays and is something that we usually have on Boxing Day with all Christmas leftovers!

What’s the difference between Gammon and Ham?

The main difference between gammon and ham is that gammon is sold raw, and ham is sold either cooked or dry-cured (the same as bacon) and can be eaten straight away.

Both gammon and ham are the same cut of meat – they come from the rear legs of the pig.

How long does Slow Cooker Gammon in Cola keep once cooked?

If there are leftovers from the joint you can wrap them up and it will keep well in the fridge for 3 days. It’s perfect for slicing thinly and putting in sandwiches. 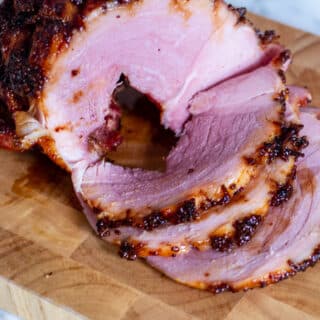 For the cooking stock

This recipe is gluten free. 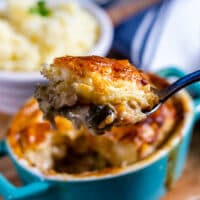 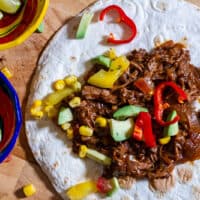 Can’t wait to try this tomorrow... not got carrots or celery but gonna see how it turns out! ?

Is there anything you can use the coke for once the ham is cooked.

Making this for family on Christmas Eve. Do I use dried or fresh bay leaves

Hi Rebecca & David hope your both well Im just going to try slow cooked gammon in cola my mother in law tried it and it tasted amazing...fingers crossed mine is as good .take care guys stay safe xx