When the weather turns cooler, stews are a popular choice for mealtimes. However, it’s sometimes nice to steer the slow cooker repertoire away from the usual choices! That’s why Slow Cooker Beef Goulash is a great dish to make. Tender chunks of beef are stewed with peppers in a tomato and paprika sauce to create a rich and warming meal.

Where does Beef Goulash originate from?

Goulash is a traditional Hungarian dish which was first made by shepherds and herdsmen in the 9th century. In fact, the name Goulash is derived from the Hungarian word for cattle ‘gulya‘. Originally it was a watery textured but highly seasoned beef stew, much like a soup consistency. Over time this has changed into the more complex dish we know today with the addition of paprika, peppers and tomatoes which serve to thicken and enrich the sauce. Now you see it served throughout Central Europe where the meat can vary from Beef, to also include Pork and Lamb.

What can I serve with Slow Cooker Beef Goulash?

There is no rule here but you commonly see Goulash served with either bread or rice and a good swirl of natural yogurt. I like the addition of the yogurt as it really compliments and mellows the slight acidity from the rich tomato sauce. I also think yogurt with a sprinkle of chopped parsley and ground paprika on top makes Goulash look pretty spectacular when serving as a centre piece in a large pot in the middle of the table!

How easy is it to make Slow Cooker Beef Goulash?

My recipe keeps the cooking as simple as possible whilst deriving the most flavour out of the ingredients! It’s definitely worth taking a few minutes at the start to season and seal the meat, toast the caraway seeds and cook off the red wine. Saying that, you will still be finished in the kitchen in around 15 minutes and the tasks involved are simple! As such, I still call this one of my ‘easy prep’ meals.

How do I store Slow Cooker Beef Goulash?

The Beef Goulash will keep well in the fridge in a sealed container for up to two days. It can also be stored for up to three months in the freezer.

Traditional Goulash recipes do not include flour and so naturally do not contain gluten however, when cooking this in a slow cooker (which traps in moisture during cooking) a consequence can be a thinner sauce! This is often resolved by the addition of flour. To ensure that this recipe stays gluten free you can use corn flour instead of wheat and the result is the same. 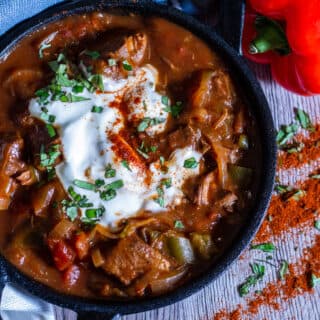 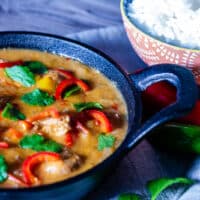 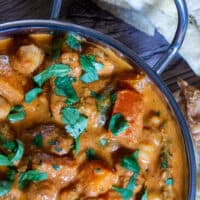 Looks good, but should be soured cream, not yoghurt (though it is still OK). Much better than a lot of other recipe I have seen on the internet.

Another delicious recipe, So tasty I served mine with rice and crusty bread. Tried a few of your recipes and they never fail

Good to hear that you liked this, and thank you for the great review!

I have just prepared this and it looks lovely. I can’t wait to taste it later. Roll on 8 hours. There is a list at the bottom of companies used for the ingredients. There is basil and oregano in the list but not in the recipe?